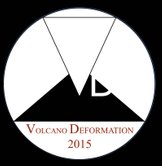 The application of elastic dislocation theory to crustal deformation problems, may be biased because of artefact singularities and numerical instabilities that exist in some dislocation solutions. Although this might not be an issue in models that are composed of a very limited number of dislocations, in high-resolution models this might produce large errors. Nikkhoo and Walter (2015) and Nikkhoo et al. (2017) developed new solutions for the displacements, strains and stresses associated with triangular dislocations (TDs) and rectangular dislocations (RDs), respectively, in both full-space and half-space. The artefact singularities and numerical instabilities along the edges of TDs and RDs in both full-space and half-space, and also below and above their vertices in a half-space are addressed in these solutions. The new RD solutions possess full rotational degrees of freedom and consequently their upper edge is not constrained to be parallel with the free surface. Using these solutions, Nikkhoo et al. (2017)  developed a compound dislocation model (CDM) that is composed of three mutually orthogonal RDs. The CDM can represent generalized point sources in the far field, and planar intrusions in the near field. The CDM and its point-source version, point CDM, are suitable for rapid source inversions without any prior knowledge on the source geometry. These fast and efficient inversions are very crucial for volcano hazard assessment and early warning purposes. 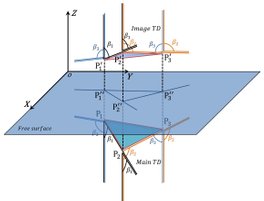 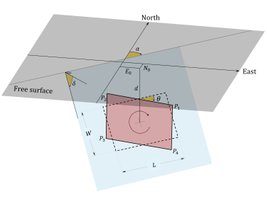 Applying the mathematical deformation models to various geodetic data and using nonlinear inversion schemes, I infer the parameters of deformation sources in volcanic areas. Using mixed traction and displacement boundary conditions in the models, I simulate processes like pressure change in cavities and slip on tectonic faults. These cavities and faults, and also the surface topography in the model may have any complex geometry. Using this approach, I have investigated stress interactions between regional and local sources of inflation (Lazufre-Lastarria volcanic complex in Chile; manuscript in preparation). Interpreting the estimated stresses throughout the whole model space, it is possible to study the formation and geometrical shape of new deformation sources. In another case study, my colleagues and I focused on the 2013 Volcán de Colima eruption (Salzer et al., 2014). The pressurized cavities in this case were located at different parts of the upper conduit system.

As another example, we showed that the subsidence and westward surface displacements observed at Tendürek volcano can be simulated by the deflation of a small sill and slip on a ring-fault structure that encircles the volcano (Bathke et al., 2015). The inferred ring-fault geometry reveals that the vertical orientation of the ring fault varies gradually from inward dipping on the eastern side to outward dipping on the western side. This geometry along with the down-dip slip on the eastern and western sides, and also the strike-slip on the northern and southern sides of the ring fault form a sliding-trapdoor mechanism that contributes the most to the observed westward surface displacements. 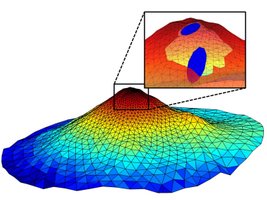 The source model of the 2013 Volcán de Colima eruption